Notes on how the railway came to Greystones (continued/1)

William Dargan now enters the picture. Another Irishman, born in Carlow, he trained in Telford's firm, 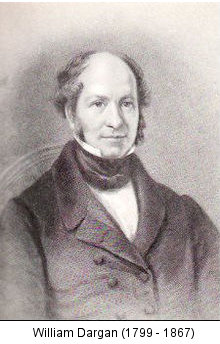 where he was involved with the building of the Holyhead Road in 1820. He then returned to Ireland, set up as a contractor and built the Howth Road. He had examined the ground for the railway with Vignoles, giving the benefit of his experience of Irish workers. He now tendered for the construction of the railway from Westland Row to Kingstown. His tender of £83,000 was to include laying the line, bridges, embankments, cuttings, leaving the line ready for the trains to begin running on 1st June 1834, and to maintain it for two years afterwards. For every week of delay, he would pay of penalty of £100, and for each week in advance, he would receive a bonus of £50.

The Construction to Kingstown Old Harbour

Building of the railway began on 11th April 1833, when Dargan's men began to cut down the cliffs at Salthill. On 17th April work began at Monkstown, and on the 24th at Westland Row. The men were paid 10s, 9s or 8s per week, depending on ability. By the 4th June a strike occurred, the men complaining that they would not work for less than 10s per week. A riot followed, and the leaders found themselves in prison. Dargan now offered 2 and a half pence for every foot of the hill work. The stronger men were pleased with this plan, which increased their wages, and anyway, they were all aware that Dargan paid higher wages than most employers, and regularly every Friday. By July 1833, 1,500 men were employed, and by September, nearly 1,800.

Local businesses prospered while the line was being built, but there were some complaints during the summer months, when scandalised residents noticed Dargan's workers bathing during their lunch hour “in an indelicate state”. Accidents occurred, of course, and the wounded men would be taken to the newly opened “City of Dublin Hospital” in Baggot Street. A new hospital was also opened in Kingstown by local philanthropists, called the “Rathdown Hospital”. This is now called Monkstown Hospital. Should a worker be killed on site, his funeral would he paid for, and a modest gratuity given to the widow. This was unusual for the time.

Meanwhile, a public relations exercise was being carried out by the Board, publicising all the benefits which would be enjoyed by the public on the opening of the railway. Females, it was said, would be particularly safe, and indeed the ladies were among the most enthusiastic travellers as soon as the line opened, and a kind of “railway mania” began. Vignoles, while in London, was summoned to Kensington Palace to instinct the Princess Victoria about railways, and she was invited to come across to open it. She did not come to Ireland, however, for another seventeen years.

On 31st July 1834, the first journey was made along the line by the Directors and then friends in a horse-drawn carriage. The first locomotive trip took place in October. Regular trains began running on 13th December 1834. The cost was one shilling for first-class passengers, eight pence for second-class, and sixpence for third-class. Five thousand passengers travelled that day, and the Directors celebrated with a banquet in the Salthill Hotel that evening. Dargan's tender had overrun by £23,000, his final account being £106,000.