Notes on how the railway came to Greystones (continued/2)

When Vignoles was redesigning the D&KR, he included plans for an extension as far as Bray. The first step, however, was to extend the line to serve the new wharf in Kingstown - the Kingstown Extension. When the Board applied to Parliament for an Act to allow this, they faced extensive opposition, led by Thomas Gresham, who owned both the Gresham Hotel and the Royal Marine Hotel in Kingstown He foresaw that, if the line were extended, Bray would certainly become a holiday resort and would compete with his hotel in Kingstown. He and others preferred a ship canal. Both sides appealed to Daniel O'Connell in London. Eventually, O'Connell was persuaded by the Board of the D&KR that the poor of Dublin would benefit if coal were brought by train straight into Dublin rather than through agents who made excessive profits The Act for the Kingstown Extension became law in May 1834. Dargan was appointed contractor, and on 13th May 1837 the new line was travelled by the Lord Lieutenant, Lord Mulgrave. It took him 13 minutes to travel from Westland Row to the new terminus at Kingstown. 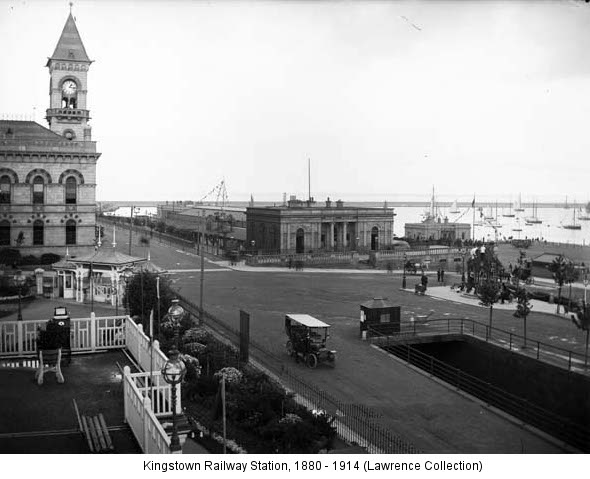 The Dalkey Extension now followed, notable because it was the first ever public Atmospheric Railway. Samuel Clegg demonstrated his system at Paris in 1838 and in London in the following year in association with the Samuda Brothers. Some of the D&KR directors saw this demonstration and were immediately enthusiastic, particularly James Pim. The Board of Public Works offered a £25,000 loan, sufficient to build the line, so it was decided not to apply for an Act of Parliament. Dargan was appointed contractor and work began in September 1842. Samuda Brothers supplied the main pipe. The pumping station was built at Barnhill Road. The trams would be pushed up to Dalkey, using air and a vacuum system, and would return using gravity. The advantages were cleanliness and quiet for the passengers, and economy for the investors However, although the vacuum principle was well understood by the Victorians, the technology was simply not well enough developed. The line was in use for ten years, from March 1844 until April 1854, when the Kingstown-Dalkey line-was handed over to the Dublin and Wicklow Railway.

The Dublin and Wicklow Railway

In August 1844 Brunel and some directors of the Great Western Railway (GWR) came across the Irish Sea to inspect the Dalkey Extension, and let it be known that they were hoping to open up another cross-channel service between Fishguard and what is now Rosslare. Therefore, they were very keen to see the line extended to Wexford and Waterford.

The D&KR were not very anxious to do this, as their present line was very profitable, and the population along the proposed line was somewhat sparse. The D&KR agreed to go as far as Wicklow, but the GWR directors thought that they would then lose interest in any further extensions. GWR went ahead and sought approval from Parliament for the incorporation of the Waterford, Wexford, Wicklow and Dublin Railway, the 3Ws.

The 3Ws was incorporated in 1846, as was the Dublin, Dundrum and Rathfarnham Railway (DD&RR). Dargan purchased the 3Ws’ shares held by the GWR and the 3Ws decided to apply for a Bill to go as far as Wicklow. In 1849 the 3Ws became the Dublin, Wicklow and Wexford Railway.

The country was now in a depressed state because of the Famine, and money was hard to find for railway-building, so shortly after work had begun at Bray Head and at Dalkey, funds ran out. It was therefore decided in the Act of 1851 to go as far as Wicklow (Dublin and Wicklow Railway). That year, also, the DD&RR changed its name to Dublin and Bray, and dropped the Rathfarnham branch.

A competition now ensued between the two lines to see who would get to Bray first. William Dargan now proved his worth. By now, he was one of the most trusted men in Ireland, as well as one of the wealthiest. He liaised between the two groups, with the result that on 10th July 1854 trains began to run between the new terminus at Harcourt Road and Bray, and between Dalkey and Bray. These new lines were on the new 5ft. 3in. gauge, and it was necessary to alter the old 4ft. 8in. lines running between Westland Row and Dalkey to the new size. Dargan was the contractor on all these works.

Dargan was now ready to tackle the Bray-Wicklow extension. Brunel drew up the plans for tunnelling under Bray Head. This was necessary because the Earl of Meath would not allow the railway to go through Kilruddery and donated the land at Bray Head. About 500 men were employed on building the tunnels and viaducts here. The work was complicated by the fact that the rocks here are among the oldest in the world and are hard and very difficult to work. Some of the rocks are also in layers and tend to slip.

It was at the Brandy Hole Viaduct that the famous accident happened in 1867, in which two people were killed. New tunnels had to he built in 1876 and 1879, and the Long Tunnel was built in 191 7.

The Bray - Wicklow line was opened on 13th October 1855 by the directors of the Dublin and Wicklow Railway and William Dargan, who travelled on a trial train to Wicklow. On 29th October it was formally opened by the Lord Lieutenant who was a passenger on a crowded train which left Harcourt Road at 11.30am and travelled down to Wicklow. We are not told if the train stopped at Greystones. This part of the railway followed the shore-line very closely, resulting in regular erosion problems, which are still with us.