The Landing of Arms and Ammunition at Kilcoole, County Wicklow by the Irish National Volunteers in 1914 (continued/2)

But a greater event was yet to happen. The Ulster Volunteers, now being unable to obtain weapons and ammunition from friendly sources in Britain had decided to smuggle in one massive consignment. Arms and ammunition were purchased in Germany and then shipped around the British Isles in time for a landing in Larne, County Antrim on April 23rd/24th 1914. On the night of the landing the Ulster Volunteer Force carried out a massive mobilisation exercise using some 700 vehicles to carry away the consignment of 35,000 rifles and 3.5M rounds of ammunition. Even though Larne was cut off from the outside world for the duration of the operation, no police, army or coastguards attempted to interfere with the operation nor was any subsequent action taken against those involved.

This was the final straw for the supporters of the Irish National Volunteers, but it was a London based committee of Anglo - Irish people which had been established on an informal basis which was to take the action resulting in the Howth and Kilcoole operations.

This meeting took place on May 8th 1914 in Grosvenor Road, London at which the recent Larne landing was one of the topics discussed. It was agreed that the INV needed arms and ammunition and that these could be obtained in Europe. The problem was how to get them from Europe to Ireland without the authorities finding out.

One of those present, Mary Spring Rice, later contacted her friends the Childers and suggested to them that arms and ammunition could be smuggled into Ireland in a fishing smack. Ms. Rice had in mind a fishing smack, the 'Santa Cruz', which lay at Foynes near her home but following an inspection Erskine Childers decided to use his 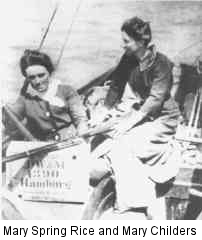 own yacht 'Asgard' which was laid up in Wales as well as Connor O'Brien's yacht 'Kelpie' to smuggle the arms and ammunition into Ireland.

The plan to smuggle in this vital consignment was now formulated. Bulmar Hobson, head of the J.R.B, examined a number of possible landing sites north and south of Dublin and finally selected the two that were to feature in the operation - Howth, County Dublin and Kilcoole, County Wicklow. The initial plan was to land part of the consignment at night on the eve of the Howth landing at Kilcoole, which due to its remoteness some 20 miles from Dublin made it an ideal landing place.

The final plan which evolved was in 3 parts: