It is an indication that a state has come of age when it recognises and gives equal care and concern to all its citizens, and especially the minorities among us. Join me in delving into the past to discover and give recognition to some minorities who contributed so much in Ireland and elsewhere in the past.

Dare I say many think that the history of Ireland began with the foundation of the state in 1922. Yet over hundreds of years Irish men and women have contributed so much to the enlighten-ment and development of practically every country in the world, as educators, doctors, missionaries, writers, poets, engineers, explorers, sailors, soldiers, politicians and so on. Most of the American presidents claim direct Irish connections as well as those from many other countries, such as South Africa, Australia and New Zealand. Even a name sake of mine, Patrick Jennings, born in Newry, was a Prime Minister of New South Wales. In 1815 an Irishman changed the course of world history when Wellington, born in Dublin, defeated Napoleon at the battle of Waterloo. The bulk of his army were Irish. In the Second World War, every other Field Marshal was Irish, including Montgomery, Alexander, Auchinleck, O’Connor, Templar, Brooke and several others. Of the three heads of the army during the Second World War, two were Irish.

There is also a minority of 52 Irish heroes, largely unknown, and with no memorial in the land of their birth. They were the bravest of men from every county in Ireland who were awarded the Victoria Cross, the highest honour for bravery that can be given. Three were from Co Wicklow - Denis Dempsey from Bray, James Byrne from Newtownmountkennedy and Donald Edward Garland from Ballinacor. He was the very first in the history of the Royal Air Force to receive a Victoria Cross. They too are a small minority, forgotten and with no memorial.

A few years ago, while researching information for my book The History of Kilcoole, I came across the story of our own home grown Prime Minister Albert Hime, who was born in Kilcoole in 1842 in Ballydonerea House off Lott Lane. The farm of 965 acres was along the original sea road and is still a ‘right of way’.

Albert was the 7th son of Rev. Maurice Hime, and Harriette, daughter of Rev Bartholomew Lloyd D.D., who was the Provost of Trinity College Dublin. Although Ballydonerea is in the parish of Newcastle, Albert was baptised in Delgany Parish Church. 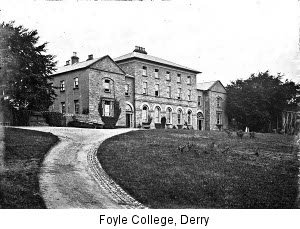 The Hime family were of Jewish descent, having changed their name from Hyam in the late 18th century and when they also changed their religion. Albert’s father was headmaster of the well-known Foyle College in Derry. It is of interest to record that when corporal punishment was an everyday occurrence in public schools he was well before his time when he abolished it in Foyle College.

Actual details of Albert’s early life are not readily available as the family history contained in letters, papers, mementoes etc, were destroyed in a German bombing raid on Colchester during the last war. However, it was a most difficult and distressing time for Irish people as Albert grew up in the period after the potato famine that witnessed two million emigrating between 1845 and 1847 and many more dying. However, we do have a copy of his baptismal certificate and we know he attended Portora Royal School in Enniskillen along with his brothers. His name appears in a copy of boarders at the school in 1857. He entered Trinity College Dublin in 1858 and then the Royal Military Academy at Woolwich, where he trained as an army engineer. To put his era in context, it was the time of the Crimean War, De Lesseps was engaged in building the Suez Canal and the Pope was proclaiming the doctrine of the Immaculate Conception. To bring us right up to date the first hole-in-one was scored by a Scottish golfer.

At the young age of 24 Lieutenant Hime, recently married to Josephine, arrived in Bermuda in 1866. At this time the British colony of Bermuda felt threatened by the USA and plans were drawn up to fortify the islands.

The newly arrived Albert Hime was given the major task of building a road 1.8 miles long, half of it across a harbour 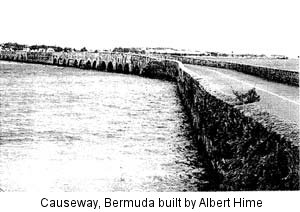 incorporating two bridges, one of which was to be a swing bridge for the passage of ships. It joined St Georges Island to the mainland of Bermuda. It took four years to complete without any serious accident. In 1871 there was a grand opening ceremony with brass band playing and bunting everywhere .Six thousand people, half the population of the Island, were present when Lieutenant Hime presented the Governor with a report which began ‘I have the honour to announce to your Excellency that this causeway is now completed and ready to be opened for public traffic’. The Governor replied ‘I receive this report with the greatest satisfaction, and I congratulate you on having associated your name inseparably with the social history of Bermuda. I trust in a long future career you may reap many distinctions’. High praise indeed for the young 24 year old Lieutenant Hime.