When I arrived here this morning nothing could exceed the consternation which was caused by the terrible intelligence which was received, that the up train from Enniscorthy, had run over one of the fearful chasms of Bray Head, and that all the passengers were killed and the engine and carriages dashed to atoms. Persons on numerous cars were to be seen driving off in haste to the scene of the disaster, and the passengers leaving by the early trains for town were filled with a painful sense of the truth of the saying that “In the midst of life we are in death.” The statements which have been made, however exaggerated, forms ready credence, as all are well aware of the dangerous character of the line where the catastrophe has stated to have occurred. Telegrams announcing the accident were despatched to town, and Mr Waldron, Chairman of the Company, Mr Maunsell, Secretary, Mr Payne, Manager, the engineers, and a large staff of workmen proceeded by special train for the scene of the calamity, which is known as the Ram’s Scalp-bridge, crossing the chasm through which the mountain torrents flow into the sea at what is known as “the Brandy Hole”, because in times gone by it was a favourite resort for smugglers running contraband goods. 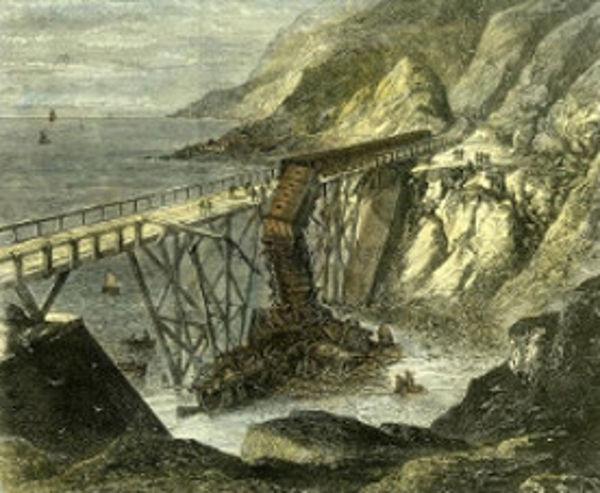 I lost no time when I heard of the accident in proceeding to this place, and I cannot convey the slightest idea of the terrible sight which met my eyes. Contrary to the report which had been made, the train went over the bridge at the mountain and not at the sea side. Beneath, at a distance of forty feet, was to be seen the engine and tender turned bottom up and bulged and broken as if they had been made of tin. The platform of a third-class carriage stood in a semi-upright position, sustaining the second third-class carriage, which partially overhung the precipice. The first and second-class carriages and the ... luggage van were partly dragged off the rails, which were warped and wrenched by the pressure of the falling engine and third-class carriage. The platform of the bridge was torn up like brown paper, and the inner rails were smashed and borne down into the chasm beneath. The platform of the third-class carriage to which I have referred was providentially the means by which all in the train were saved from destruction, as the base of it settled in the earth, and the upper end getting jammed under the third-class carriage which followed it prevented it hauling over the entire train. The couplers and coupling chains also did good work, as they did not break off, and by that means kept the second carriage suspended, I may almost say, in mid-air. I never will forget the fearful sight which met my view from the centre of the bridge. At one side was the sea rolling into the rocky inlet one hundred feet below, with portions of the broken carriages lying on the beach, at the other Bray Head rising above the chasm, in which were to be seen the dying and the dead as they were being removed from the debris, and the piles of earth and falling stones which had rolled down the cliff. Young and old, male and female, were to be seen writhing in agony and presenting a most lamentable appearance.