Andrew McFarland came from Omagh to Greystones at the end of the 19th century. In 1897 he purchased some land on the corner of Church Road and Killincarrig Road, opposite the Greystones train station, and paid the princely sum of £800 to develop two shops with accommodation above. (He also developed the row of small red-brick houses on Church Road.) According to the archives the builder who carried out the work was a Mr PJ Kinlen, after whom Kinlen Road in The Burnaby is named.

Andrew set up a successful grocery business in one of the shops which he and his family lived above. Andrew’s son Claud took over the running of the shop when Andrew died in 1937 and it remained a family business until 1970, when Claud retired.

The grocery shop was called The Burnaby Stores (see a copy of advertisement circular below). Many of the older residents of Greystones will have fond childhood memories of the shop, especially at Christmas when the windows would have been decorated with nuts, boxes of currants and raisins, and green and yellow candied peel; the other stacked high with Wexford hams. 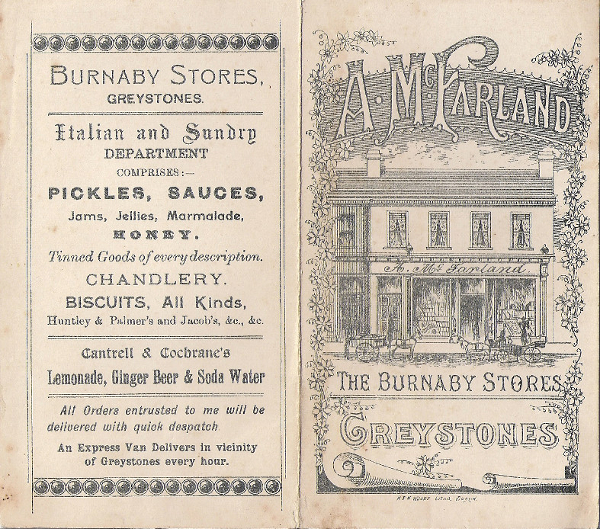 The shop next door to The Burnaby Stores in the early part of the 20th century operated as a chemist. In 1921 – 1922 this was refurbished to accommodate what was then the Royal Bank, and Andrew McFarland opened up the first bank account in this branch. In 1966 the Royal Bank was incorporated into Allied Irish Banks (AIB) and in 1971, after Claud retired, AIB took over The Burnaby Stores shop and has been there ever since. Four generations of the McFarland family were at the bank's official re- opening in 1971, including Claud's son-in-law Paul Hatton - who was then one of the managers with Allied Irish Banks in Greystones. The old Royal Bank/Allied Irish Banks shop is now Eugene’s Newsagents.