At the age of 33 in 1875, now Captain, Albert Hime, arrived in Natal to take up the important post of Colonial Engineer with responsibility for organising the construction and maintenance of roads, bridges, military outposts, etc. In addition his tasks included the extension of the railway from the coast to the interior, the dredging of the harbour at Durban, the building of a pier there, and everything else that was needed to improve the facilities of the colony and strengthen its defence.

Of course the Boers, who were the original Dutch settlers, and the Zulus both resented the expansion of the British into their lands, which resulted in continuous warfare. Gold and diamonds are not only a girl’s best friends, but in Africa and elsewhere everyone fought over them.

Albert Hime was much involved in the preparation of an expeditionary force of solders and auxiliaries who advanced into Zululand. He was fortunate in that he did not accompany them for some 14,000 were massacred by superior numbers of Zulus. Shortly after this horrific defeat was redeemed in the battle of Rourke's Drift where a mere 100 men under Lieutenant Chard RE fought a heroic and successful defence against 4,000 Zulus. Chard and 10 others were awarded Victoria Crosses, the most ever awarded for a single battle. No doubt you have seen the film of Rourke’s Drift. I have been to both battle fields and was greatly moved by the mass graves and memorials.

Albert Hime retired from the army in 1893 when Natal was granted representative government. He was more an engineer than a solder or politician and so became Minister of Lands, Works and Defence for which his experience as Colonial Engineer suited him very well. It was said of him that ‘In Council he was a universal favourite with his Celtic readiness and wit. How well he knows how to demolish an opponent’s argument with good humoured badinage’. He was a highly efficient engineer for which he had been trained. Although he held a military rank he never led men into battle and it is unlikely he ever carried a military weapon. As a Colonial Engineer his task was to establish and maintain means of communication such as roads, bridges, railways and harbours so that military and civilian alike could receive their necessary supplies. It was for his engineering feats that he received recognition and rewards, not for any military success in which he was engaged.

As Colonial Engineer he was given the task of surveying and marking the state boundaries between Natal and the Orange Free State. A report sent back to London on the survey gives the participants great praise ‘I would beg to bring under your most favourable notice the services of Colonel Hime and Mr Fannin who both in their relations with the Free State and in carrying out the work of the survey, discharged the commission entrusted to them with a tact and discretion that call for my warmest commendation’. 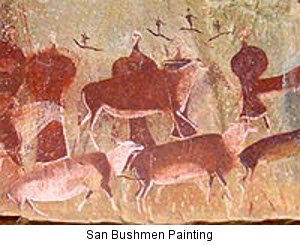 During his survey, often up in the Drakensburg Mountains he discovered many of the San Bushmen cave paintings in the area. Here and elsewhere he discovered cave paintings depicting scenes of stalking and hunting of game, of fish being caught in rivers, preparation of food and religious ceremonies and so on. The final paintings are scenes of wagons, cattle raiding, and riders on horseback carrying guns with flames coming out of them and the Bushmen defending themselves with spears and bows and arrows. Tragically the paintings end here as new invaders, including the Zulus from the North, exterminated the San people. All that remains of these lost people are their vivid and beautiful cave paintings.

He became Prime Minister of Natal in 1899 and was largely responsible for guiding Natal through the difficult period of the second Anglo-Boer war. One of the main incidents of that was the capture of Ladysmith by the Boers in 1900. All communications were cut off between Ladysmith and Durban during a long siege of 4 months. It took sometime for Heliograph contact to be made. So rather amusingly, lacking our instant access via mobile phone, the message of the capture of Ladysmith was sent to Prime Minister Albert Hime by a carrier pigeon called ‘Invincible’. Its last resting place, now preserved and stuffed, is a glass showcase in the museum in Durban.

Albert Hime received many rewards during his lifetime. He was made a CMG, Companion of St Michael and St George. He was knighted in 1900 and made a Privy Councillor in 1902. His own University of Dublin, as well as Cambridge and Edinburgh conferred honorary degrees of Doctor of Law on him. He received his honorary degree with some other very distinguished people. There was Whitelaw Reid, Ambassador to France, two Indian Maharajas, the Governor General of Canada and the Governor of Ceylon among others.

In 1903 Albert Hime retired as Prime Minister of Natal and returned to England. He took a 21 year lease at £210 per annum on a house on the banks of the Thames near Marlow. He renamed it Lynbrook after a favourite fishing place he had known.

In this peaceful spot he had time to reflect on his long career and enjoy his retirement and fishing. He remained there until his death in 1919 aged 77. He had indeed achieved what was predicted about him when aged 24: that ‘he would enjoy a long future career and reap many distinctions’. He was a man with the outlook and morals of his day and should not be judged by today’s standards. There were seven children from his marriage to Josephine. All of them remained in South Africa. Five sons were in government service and one became a lawyer. Most started as clerks with a yearly salary of about £200. All of the family were keen on sport and represented South Africa in Test Cricket. Some of his grandchildren still live and work in South Africa. Himeville is named after him.