Suppose, then, the visiter to have undertaken the expedition just now mentioned (of proceeding by Mrs. Latouche’s private road along the front of the wooded hill, beneath the octagonal temple), a most extensive and diversified view is gradually disclosed; to the south, the richly wooded and highly improved tract of country from Delgany to Wicklow, bounded on the east by the sea, and on the west and north by lofty mountains, which afford so much shelter, that the climates at the northern and southern sides of the chain are sensibly different.

This vast and fertile tract of country, which is thickly inhabited by gentry, is composed of an alluvial strata of limestone-gravel, pebble, limestone and marl, all of which can be converted to the purposes of manuring. In the last of these substances, viz. marl, the fossil horns of the Moose deer are found, an animal of enormous size, formerly an inhabitant of this country, and still existing in North America. A head and antlers of this stupendous creature were some years back discovered in a marl pit in Mr. Archer’s grounds near Inis-tymon. A violent dispute has existed for years amongst naturalists as to the classification of this Hibernian animal, some calling it the Elk, while others, with more propriety, have endeavoured to establish the truth and certainty of its being of the species called amongst the Algolquin nation, Moose. In a pit belonging to Mr. Brownrigg in this county, many specimens of fossil remains have been found; the horns found at Inis-tymon, are preserved in Newtown-mount Kennedy-house.
Having reached the southern extremity of the hill, a pretty seat is discovered, sheltered by trees, consisting of drapery and ornaments in the style of an eastern pavilion; it is usually called the Turkish Tent, and commands a view of the fertile vale towards Newtown-mount Kennedy...

After indulging in this delightful prospect, the visiter leaves the tent, and proceeds along the top of the hill, in a direction exactly contrary to that by which he reached it, by a path winding through thick shrubberies of evergreens, for a distance of near a quarter of a mile; on the left side of this walk a little cottage is concealed amongst the trees, where an old woman resides, whose chief employments are the care of the octagon room, and to attend upon visiters. 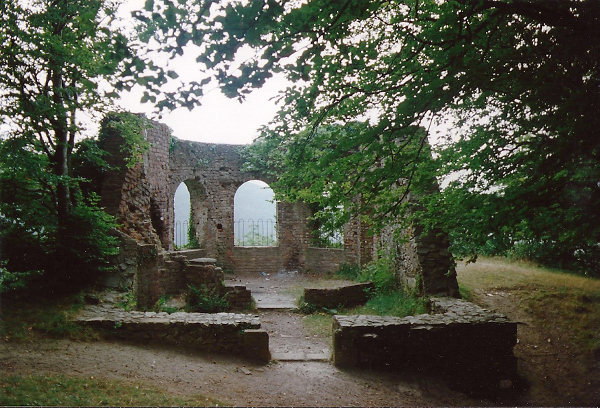 The Octagon House is a small building, raised upon a rock in an extremely exposed and elevated situation; the interior Is lined with drapery, and assumes the appearance of a bell tent; from the windows, which are glazed with plate glass, there are varied and extensive views, that to the south, over the Downs, to the north, of the Sugar-loaf; Scalp, &c.: there is here a small but judicious collection of books, and some few shells and minerals. In the hall of the octagon building is a stuffed panther, so placed, that it scarcely ever fails of startling the stranger who enters unconscious of its presence.