Opening of the Grand Hotel, Greystones

The Grand Hotel, which has been built at Greystones, has just been opened, and on Saturday a large number of gentlemen, in response to invitations issued by the Directors, attended at a dinner given in the hotel in honour of the occasion. The new hotel is built quite near to the sea, so that when the tide is in, the water comes within a few yards of it. The architect was Mr W M Mitchell, while the building, etc., was carried out by Mr Kiernan and Mr Baird. The hotel reflects credit on everybody who has been associated with it. There are no fewer than forty rooms in it, and these include billiard and smoking rooms, a commodious coffee room, and a ladies’ dining room. The entire hotel is furnished in the most luxurious style; and beyond all doubt this splendid edifice adds a fresh element of beauty to a district which is singularly rich in its possession of those picturesque combinations of hill and dale for which Wicklow is renowned. From the north Bray Head frowns down upon it; westward the wooded slopes of the Wicklow Mountains, and on the south and east, the mighty sea. Nobody could pitch upon a lovelier spot for a hotel. Hitherto Greystones has been rather neglected; now with a hotel like this, and the cordial co-operation of the railway company, it may fairly be said to be raised to a position of friendly rivalry with Bray. During the summer months coaches will be run at frequent intervals between the Grand Hotel and Glendalough. The gathering at the hotel on Saturday evening was a most enjoyable one in every way, and the dinner was served in first-class style. Mr W J A Fox presided. On his right was Lord Powerscourt and on his left the Lord Mayor (Alderman Dillon) …

After dinner, the Chairman proposed the toast of “The Queen,” which was cordially drunk, the entire company singing “God Save the Queen.” 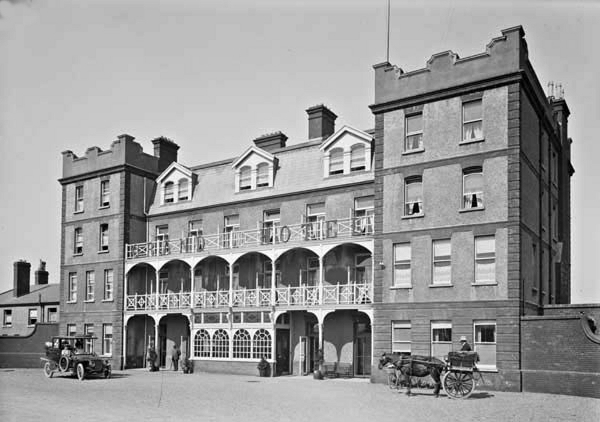 Lord Powerscourt gave the toast of “Prosperity to the Grand Hotel.” The opening of a hotel like that, he said, was a most pleasing and happy sign of prosperity in the district, and it necessarily led to further prosperity (hear; hear). He himself had been engaged in building for the last 30 years, and therefore he took a special interest in the erection of a new hotel in his part of the country. It took a good deal of trouble and much skilful management to construct a house which was at once comfortable and convenient. As far as he could judge, these qualities had been combined in the Grand Hotel (applause). He heartily thanked the directors for having invited him to that dinner, for a function like that was one of the pleasantest things in a man’s life (applause). He had great pleasure in giving the toast of “Prosperity to the Grand Hotel.”

The toast was drunk with enthusiasm.