There are two sides to every story as this incident will reveal. Until the widespread availability of motor cars and the operation of public transport in its current form, many men made a lucrative income by transporting people to and from railway stations in horse drawn vehicles of various types. Greystones was no exception but on New Year’s Day 1908 a row broke out between three carmen outside Greystones station which resulted in this trio appearing at the Bray Petty Sessions on Saturday 18 January 1908. 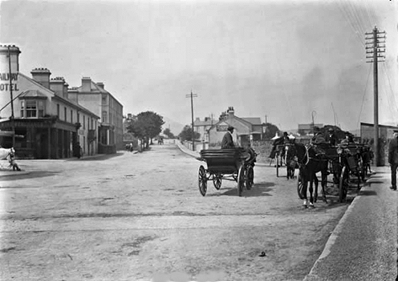 Presiding with 5 other magistrates and Mr Meldon, R.M., was Mr Devaynes Smyth, who first heard from James Evans who said that on New Year’s Day (1908) he was sent by Lady Ball Greene to the (Greystones) railway station to meet Dr Williamson off the 3.23 p.m. When he arrived in the station, he did not see the doctor alight from the train but did see three ladies who asked him if there was a private trap available to bring them to Delgany. Evans said there was none but advised them that if they went over to the other side of the station it might be there and if it was not, they were to come back to his cab and could go with him but if they met their car on the way, he would not charge them anything for it as he was going up to Lady Ball Greene to inform her that the doctor had not come on the train. He went on testify that when he was near the Railway Hotel, Richard Gorman drew up alongside him and struck him twice across the face with his left hand. Evans said that he told Gorman to mind his own business as he did not want to have anything to do with him. He then testified that Christopher Gorman then leapt off his cab, removed his coat quickly and told his brother to pull the witness from the cab.