However remote it may have seemed from the hurly-burly of national and international politics, Greystones could not escape their reverberations. In 1910 the Pier was the site of a pivotal event in the campaign for women’s suffrage, when militant activists Hanna Sheehy Skeffington and Hilda Webb disrupted a visit by the Chief Secretary (for further details of this incident click here). 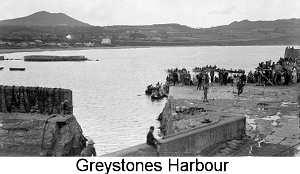 Yesterday the Chief Secretary for Ireland, Mr Birrell … motored to Greystones for the purpose of inspecting the pier, which was represented to him by the local authorities as being in such a condition of dilapidation that a grant of State money was urgently necessary for its re-equipment. The Chief Secretary was met by members of the Urban District Council, several clergymen, and others interested in the welfare of the district, and shown the tumbledown heap of masonry, which is practically all that remains of a pier constructed less than a quarter of a century ago. He had not proceeded far on his rounds when he was taken possession of by two ladies, one of whom walked on either side of him. Most onlookers assumed that the ladies, like other persons present, were merely interested in the welfare of the locality, and their approach consequently attracted very 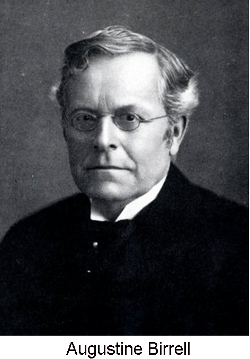 little notice. Their voices were, however, soon raised to so high a pitch as to suggest that some more lively topic than the reconstruction of a pier was under discussion. Mr Birrell was at length heard to say that he had many deputations to receive, but the answer was – “You would not hear our views, and so you have left us no alternative but to approach you in this way, and we shall do so every time you appear in public.”

The Chief Secretary looked round despairingly … It seemed as if he was actually about to call for help, and though the situation was most annoying to persons intent on serious business, yet it had its ludicrous side, and it was the latter, judging by numerous guffaws, which most prevailed for a time … Mr Birrell tried to escape, but in vain … One lady did practically all the talking for both, and it was quite evident after she had uttered the first few sentences that the task which she had undertaken was by no means beneath her powers. 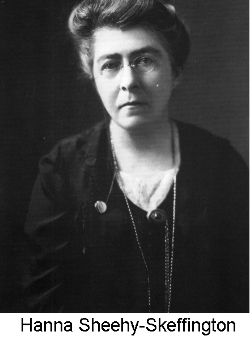 Mr Birrell was meanwhile practically a prisoner, and for once his buoyancy of spirits seemed to have completely deserted him. A cry of “Police” was raised, and a young constable walked sheepishly across the street … but hesitated to act. Then Mr William Redmond, M.P., advanced, and spoke most courteously to the ladies, assuring them that he was a warm advocate of their cause. He said that he had been authorised to state that the Chief Secretary would receive a deputation from the Women’s Suffrage Association on Friday. “Thank you, very much,” was the reply. “That shows that there is something to be gained by bringing some pressure, even on a Chief Secretary.” Amidst a good deal of laughter the ladies walked away. The constable, who seemed very much perturbed, said, “How could I tell that them ones would turn up at Greystones?” The remainder of the inspection was carried out under calmer conditions.

It was stated that the two ladies were Mrs Sheehy-Skeffington and Miss Webb.