When we set off from Greystones on Thursday morning in April for our weekend in Kerry the snows were on the Wicklow hills. But we were going south and to the semi tropical climes of the south west coast. Little did we know we were headed into days of fierce winds, rain, cold and hailstones but stout hearted lot that we were it didn't stop us from doing anything we planned except for a boat journey on the lake.

We broke the journey in Roscrea to meet our guide to the castle and Damer House where work is still in progress following years of neglect. This lovely old house, early 18th century, has survived being a school and the offices of a bacon factory and the local commitment has achieved much. One of the interesting facts that emerged from this house was that at that time meals were not in dining rooms but rather people had their meals served in the bedrooms and as it was a bitterly cold house they had the right idea. 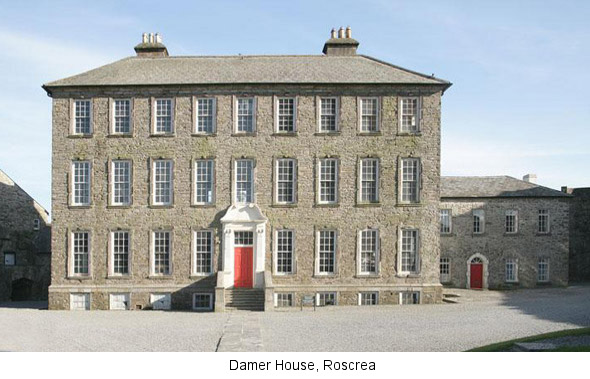 We arrived early evening into Killarney where secretary Aileen Short, knowing how much we all liked the touch of luxury to which we could easily become accustomed, had booked our party into the warm delights of the Great Southern Hotel.

On the Friday morning we piled into our coach where driver Paul looked after us all like a guardian angel and drove to Muckross where we met up with out guide and local historian Gerry O'Leary. There in a howling gale we heard about the O'Learys, McCarthys and O'Donoghues buried there and the four poets who lie there - Aogan O'Rahilly, Eoin Ruadh O'Suilleabhain, Geoffrey O'Donoghue and Piaras Firtear.

In the cloisters we heard about the Yew tree that dates from 1440 and still stands there. We looked forward to the shelter ahead of us at Muckross House and one irreverent member was heard to sigh “that old Friary was a pain, I'm frozen and right now don't care how many McCarthys are buried there”.

We toured Muckross House which is continually being improved and heard about the Vincent family who gave the house to the nation. The furniture is gradually being assembled by the Office of Public Works and hand painted silk wall covering in the billiard room was brought from China. Perhaps it's the little things that stick in the mind. I can hear Lily Flood's voice as she looked at the bed in the master bedroom with its piles of pillows, as people at the time slept sitting propped up. Her comment “What else would you expect, full of indigestion”. 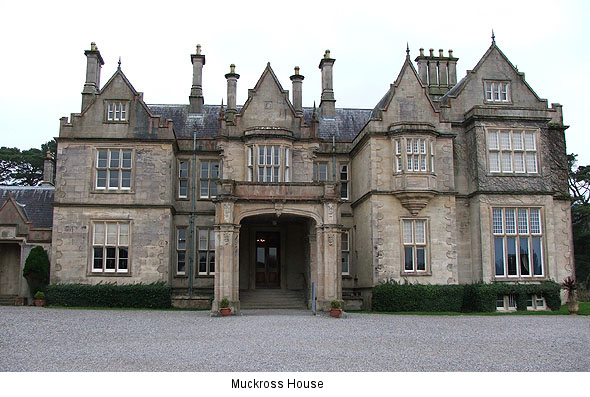 After lunch it was off to Ross Castle which has opened to the public in recent times and where an enormous amount of restoration work has been carried out. This 15th century fortress of the O'Donoghue Ross chieftains with its fortified bawn, curtain walls and towers was most interesting. It has everything a good castle should have, a murder hole, a garderobe and a musicians’ gallery. The small details are fascinating, the doors and windows on pivotal hinges and the fact that special tools had to be made to create the oak roof of adzed timbers which are pegged with dowels.