Letters to Stillorgan from the Western Front

During World War I, many women at home sought ways of supporting the war effort and one way was to form an organisation to send supplies to soldiers at the front. Monica Roberts of Kelston, on Stillorgan Road near White Cross, set up such a society in the autumn of 1914. Kelston still stands, now surrounded by houses, and today’s entrance is from Leopardstown Road. Monica’s father was Rev. W. R. Roberts, a mathematician who was a Senior Fellow and Vice Provost of Trinity College, chaplain to the Lord Lieutenant and treasurer of the Royal Irish Academy. 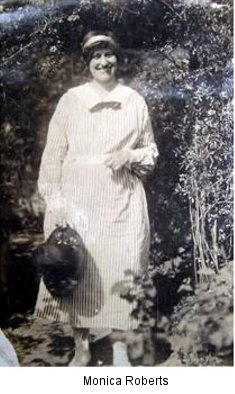 Some 390 letters sent to Monica Roberts from the front were kept by her daughter and are now deposited as the Monica Roberts Collection in box-files in the archives of the Royal Dublin Fusiliers’ Association in Dublin City Library, Pearse Street.  They were addressed to ‘Kelston, Stillorgan’ and were sometimes forwarded to other addresses when Monica was away from home. The letters form a remarkably vivid and moving source of information about conditions at the front and about the attitudes of the men. It is a privilege to have a glimpse into the hearts and minds of these young men and to witness the courage, endurance and patriotism shown in their letters. Reading the men’s handwriting with their underlining, alterations and marginalia gives a sense of the uniqueness of each one. Even the envelopes and postmarks are telling, as is the kind of paper they had available. In some cases only parts of pages have survived, the rest having decayed.

The Band of Helpers

Miss Roberts called her group the Band of Helpers, and she set out its constitution in a typed page headed ‘Rules for Band of Helpers to the Soldiers’:

1. This Society will last during the war and shall be called ‘Band of Helpers to the Soldiers’.

2. Members pay 3d on being enrolled, which sum will go towards buying comforts, also for postage of goods to the front.

3. Members to send monthly, addressed to Miss Monica Roberts, Kelston, Stillorgan, some contribution, however small, either in money or any of the following articles, all of which are said to be useful by the War Office. Handkerchiefs, bootlaces, chocolate, peppermint, dried fruits, briar pipes and tobacco pouches, tobacco, cigarettes, cigarette tobacco and cigarette papers, small tins of boracic ointment or borated vaseline for sore feet, antiseptic powder, post cards, pocket knives, lead pencils etc.

4. These articles will be forwarded monthly to the Dublin Fusiliers and the Royal Flying Corps.

5. If the Society grows, and receives good support, more regiments could be included. But at present, the above mentioned will be all to whom this Society will contribute.

6. Members are required to kindly tell their friends about this Society, for as many members as possible are required.

The Irish Times archive has recently been made available on-line, and a search reveals that the work of the Band of Helpers featured from time to time in its pages.  Monica kept meticulous accounts, and on 14 December 1914, she listed the items which had been sent to the front: 4,836 cigarettes, 14 pipes, 17 packets of tobacco, 83 pairs of socks, 53 mufflers, 22 pairs of mittens, 12 pairs of cuffs, 7 pairs of gloves, 19 body belts, 16 helmets, 2 vests, 127 handkerchiefs, 138 pairs of laces, 140 tins of boric ointment and vaseline, 161 tins of foot powder, 142 cakes of soap, 10 shirts, 505 postcards, 48 letter cards, 6 packets of letter cases, 7 packs of playing cards. Other items sent were: chocolate, cake, peppermint, brandy-balls, pencils and knives. In other letters to the paper, Monica also listed the amounts of money donated, and the names of the donors.