Today we are becoming more concerned about climate change, with increases in worldwide temperatures prompting climate experts to forecast various worrying future scenarios (Costa de Greystones, anyone?). However, if we go back 250 years, one discovers that Ireland was struck by a sudden 2-year mini Ice Age from 1739 to 1741, and this major event remained largely unknown by most people until David Dickson’s book: Arctic Ireland – The Extraordinary Story of the Great Frost and the Forgotten Famine of 1740-1741, published by The White Row Press, appeared in 1997 in which he chronicled the events in Ireland during this 2-year period.

Most of us can remember where we were when Hurricane Charlie swept through the country in 1986, when JFK was assassinated in 1963 or 9/11 2001 when the twin towers of the World Trade Centre in New York collapsed as the result of terrorist attacks. So 100 years ago the ability to recall the Night of Big Wind of January 1839, because of its scale and the devastation caused, was one of the qualifying questions asked of old age pension applicants by pension officers in late 1908 where an applicant was unable to provide written proof or confirmable details of his/her birth that they were aged 70 or over as full civil registration of births, deaths, and marriages did not commence in Ireland until 1864.

On the night of 5 January 1839 heavy snow fell across Ireland and was replaced on the following morning by an Atlantic warm front which brought calm to the country with temperatures rising during the day resulting in the rapid thawing of the previous night’s snowfall. During the day an unnoticed deep Atlantic depression began moving towards Ireland and created a cold front when it collided with the warm air over Ireland bringing strong winds and heavy rain. Around noon reports of severe weather were reported from western parts of Co. Mayo with the storm gathering strength as it moved eastwards across the country. By midnight the winds had reached hurricane force and it’s believed that this storm was the most severe storm to impact on the country for several years. Severe property damage occurred in Connacht, Ulster and North Leinster with between 1/5 and 1/4 of houses in Dublin being damaged ranging from broken windows, tiles stripped from roofs, to the complete destruction of poorly built houses. All over the country the badly built homes of the poor suffered the greatest damage and destruction. Farmers were particularly affected with stacks of hay and corn for livestock being damaged or blown away while shipping was also affected with a number of vessels being wrecked while trying to ride out this exceptional storm. 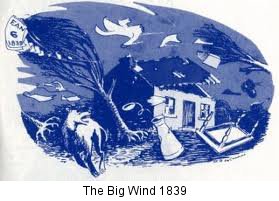 In the book The Night of the Big Wind - The Story ofthe Legendary Big Wind of 1839, Ireland’s Greatest Natural Disaster, by Peter Carr and published by The White Row Press, the impact of this event on the country as a whole is covered in depth. How many died as the result of this storm has not been quantified precisely but it is estimated that somewhere between 300 and 400 people lost their lives. In Mary Street, Dublin, 6 people were killed in a fire while in Glasnevin a member of the Dublin Metropolitan Police was killed after a wall of the Botanic Gardens collapsed on top of him. In his book Carr provides an A to Z listing of damage by town and city throughout Ireland where it was reported in the newspapers of the day thus providing the reader with a clear indication of the vast scale of this weather event nationally.