In 1767 a pamphlet was published in Dublin, announcing the imminent opening of a new type of charitable institution in the city. The anonymous author acknowledged recent advances in the provision of relief to a range of deserving categories, but drew attention to the need for yet another establishment, ‘an asylum’, as he described it,

For penitent females, early seduced from the paths of virtue … but now willing, nay eager, to return to their duties to God, themselves and the community.1

Derided by its critics as ‘wild, ideal, romantic and absurd2, the house opened in the same year in Leeson Street in Dublin was an attempt to deal with the perennial but increasingly visible incidence of prostitution. It was the first undertaking of its kind in Ireland, pioneering both in the objects of its concern and in the role which it allocated to women in the administration of charity.

The principal initiator of the 1767 appeal and the founder of the asylum which it publicised was Lady Arbella Denny, an aristocratic widow with excellent connections and a record of involvement in a variety of philanthropic and improving initiatives. Born in 1707, Lady Arbella was the daughter of Thomas Fitzmaurice, twenty-first Lord and first Earl of Kerry, and of his wife, Anne, daughter of the cartographer, political scientist and entrepreneur, Sir William Petty. Much of Arbella’s childhood was passed at Old Court, the Fitzmaurice seat at Lixnaw, near Tralee, with periodic visits to Dublin and to London. Her upbringing and that of her siblings was materially privileged, but overshadowed by the whims and eccentricities of her father. Described by his own grandson as uneducated, ‘obstinate and inflexible’, Thomas Fitzmaurice was an ‘excessive bad husband’, a despotic father, and a tyrant who held his household and the surrounding countryside ‘in strict subordination’. Lady Kerry, on the other hand, was a cultivated woman of ‘superior understanding, address and temper’. Ambitious and active, she was credited with having brought into the Fitzmaurice family ‘whatever degree of sense may have appeared in it, or whatever wealth is likely to remain in it’. From her father, Arbella inherited a strong attachment to her native place – although much of her life was spent out of Kerry, she never lost her interest in affairs there and left strict instructions that she be taken back to Tralee for burial. However, it was her mother whom she recalled with affection, and it was surely from her that she inherited her interest in science and the arts, her enthusiasm for innovation and for improvement. Certainly, it was with the maternal side of her family that Arbella most closely identified, and she is on record as having declared herself ‘prouder of my grandfather Petty’s struggles, and industry, and success in life, than of all the honours of the House of Lixnaw’.3 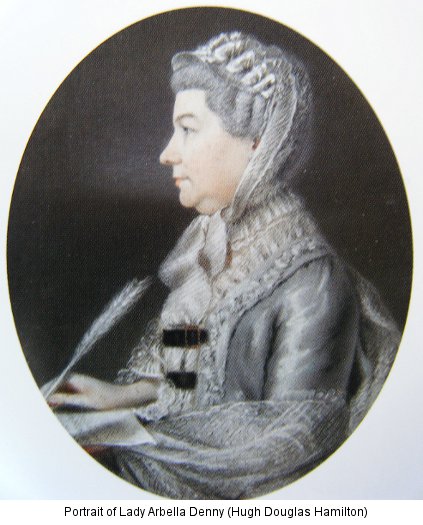 At the age of twenty, Arbella married. Her husband, Colonel Arthur Denny, who was a neighbouring landowner, described as ‘a very good sort of man’, but ‘uninformed and ignorant’.4 The marriage was childless, but Arbella found a focus for her affections in her nephew, William Fitzmaurice. Neglected by his parents, William spent his first four years in the care of his grandfather at Lixnaw and for the rest of his life treasured the memory of his aunt’s care and tenderness at this time. ‘If it was not for her’, he wrote,

‘I should have scarce known how to read, write, or articulate … It was to her alone I owed any alleviation of the domestic brutality and ill-usage I daily experienced at home. She was the only example I had before me of the two qualities of mind which most adorn and dignify life – amiability and independence.’5

Following her husband’s death in 1742, Lady Arbella was left with ‘comparatively small means for her rank in life’.6 She refused several offers of marriage, having acquired, she said, ‘too much experience ever to become a slave again’.7 In 1745 she moved to Dublin, and occupied the almost half century which remained to her in travel, hospitality and good works. She was a member of the Ladies’ Committee of Dr Mosse’s Lying-In Hospital, and actively supported the work of the Dublin Society, of which in 1766 she was elected the first honorary and the first woman member. In 1758 she embarked on a twenty-year association with the Dublin Foundling Hospital, and over that period managed to introduce a number of much-needed reforms which improved living conditions and significantly reduced the mortality rates at that institution.